“Hazardous Waste” is a broad category of regulated materials that have specific handling and disposal requirements. “Universal Waste” is a special sub-category of hazardous waste that makes the disposal of certain wastes (e.g. fluorescent bulbs, mercury switches, etc.) more defined and less complicated.

During the early 1970’s, the Federal Government established new agencies (e.g. OSHA, EPA, & DOT) that subsequently issued new regulations in response to the large amounts of potentially harmful materials being used in the construction of buildings and industrial facilities. The first regulation OSHA promulgated was Asbestos, which was soon followed by standards for safely handling other carcinogens and hazardous materials. EPA was quick to follow with the RCRA and TSCA rules, which both address use, handling, and disposal of hazardous substances. DOT set up the transportation requirements for hazardous wastes in 1975 under the HMTA. Buildings, including Industrial and Manufacturing facilities built before the 1980’s are likely to have regulated materials that must be properly removed, containerized, and disposed before demolition can occur.

When a facility owner decides to renovate or demolish a component, a building, a unit, or an entire plant, the owner is required to be aware of the hazardous materials present. When the demolition or general contractor begins renovation or demolition work on the facility, they also become responsible for the proper handling of hazardous wastes. Owners and contractors must keep their employees safe and protect the environment. This responsibility can be overwhelming when there are 100’s of regulated materials. Depending on the size and project-type, an Industrial Hygiene company may be needed to identify all the hazards present.

Dismantling contractors and facility owners contract PTI to ensure that Hazardous Wastes are properly removed, handled, and disposed. PTI has experience abating the most common types of Hazardous Waste prior to demolition of plants and buildings, including:

PTI was invited to bid a fertilizer manufacturing facility located in the Midwest. The facility owner tested the insulation and coating on a 50’ diameter sphere that was scheduled for demolition. The exterior layer of material covering vessel insulation contained high levels of Lead. The owner had originally planned to have both layers removed as hazardous material. After its initial pre-bid inspection, PTI suggested that the outer coating (where the lead was present) be removed and disposed of (as hazardous waste) while the bulky insulation could be handled separately as non-hazardous waste. The owner’s environmental group performed additional lead sampling to confirm that this approach was feasible.

PTI was selected to perform the work, which started mid-winter. In addition to the 50’ diameter sphere, PTI stripped a 32,000 gallon storage vessel with the same material. For the duration of the project, PTI’s crew endured cold weather, snow storms, mud, and constant wind. Despite the challenges of the elements, PTI successfully completed the lead abatement on schedule. PTI’s creative approach to the project, represented a substantial savings to the facility owner. 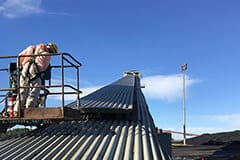 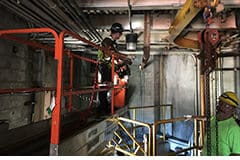 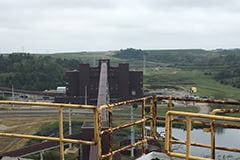 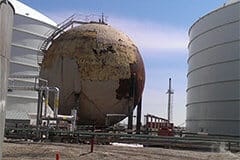 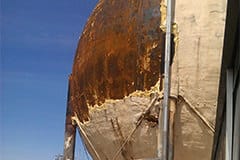 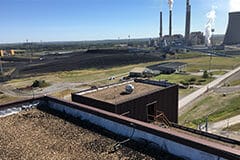 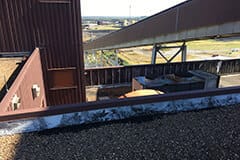 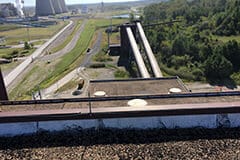 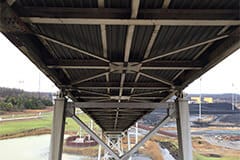 Download a full version of this case study in PDF format